Abbey Label’s very own George Welham will be taking on his first Marathon on Sunday 23rd April.

George is a sales administrator and will be running to raise money for two charities; Blind Veterans UK and Alzheimer’s Society.

“I decided in the summer of last year that I wanted to complete a marathon and London seemed the obvious choice. Blind Veterans UK & Alzheimer’s Society are two charities that are close to my heart, and I approached them to see if they wanted me to run on their behalf” said George. “I received confirmation from Blind Veterans UK that they had a place available, so I have decided to split the money I raise between the 2 charities” 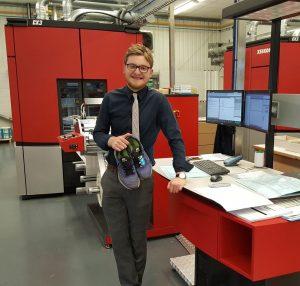 George has been training hard and had previously completed a half marathon just a few weeks ago in Cambridge.

“Completing the half marathon in a good time gave me great confidence that my training has been going well. I have had great support and advice from my colleagues at Abbey Labels over the past few months. Some have even come out training with me and others, who are London Marathon veterans, have given me tips on what to expect during the 26 miles.”

“Everybody is wishing me luck and hopefully I can make them all proud when I cross the finish line on Sunday.”

We hope that you will join us in donating to support George and his chosen charities.

You can donate securely at https://www.justgiving.com/fundraising/GM-WELHAM